Find five Images in The Americans were symbols are used. Explain what they are and how they function in the images.

The shot below is a shot of a Trolly bus in New Orleans It as some nice reflections it is reasonably composed there are People in the image a boy, a girl, a woman and a man, you could say things of interest.

But what does the Image signify what are the signifiers saying apart from the above, could it be saying that the white men and women think of themselves to be better than the Black people that are at the back of the bus, The pictures were taken between 1955 and 1956. Segregation on transport was abolished in 1954 just twelve months before, but it seems that it is taking a while to catch on. The second black man looks like he is about to burst into tears saying look nothing has changed. 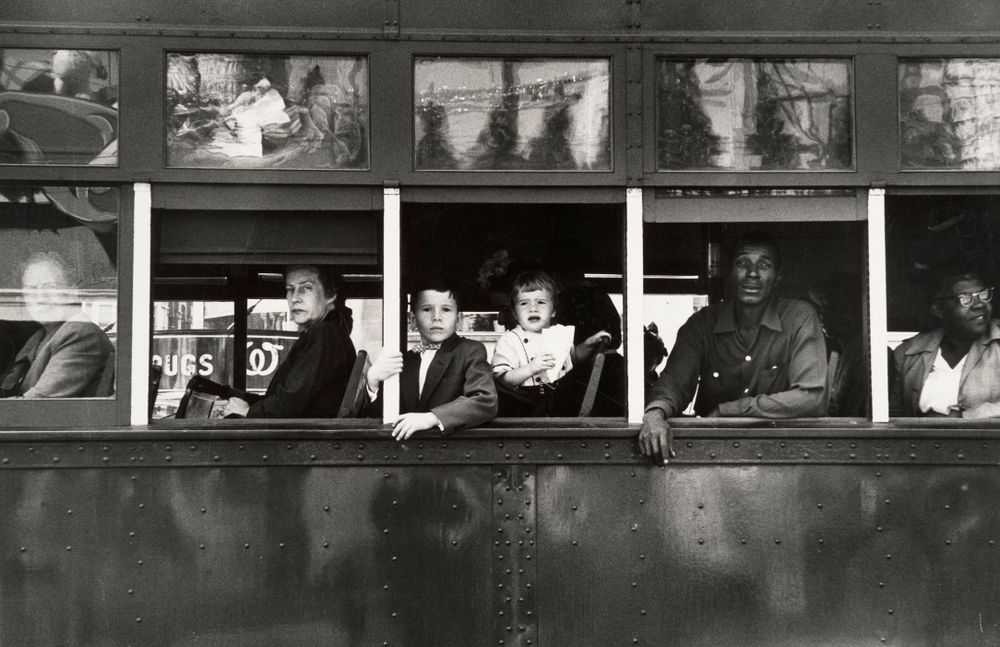 The stars and stripes are flying the women are looking out of the window one woman is getting ready to go out. What does this signify? The woman on the left is flying the flag as it is attached to her window she is proud to be an American. The carnival is passing her house but she as no money to go out. The woman on the right is better off she as got ready to go out and join the parade. Both in their own way are showing their pride in being American.

A street portrait but what were Franks thoughts when he made it was it these look like two beautiful young people or was he following the theme of the work, capturing the change.

What is signified in this Image, they are not looking at the camera their faces are stern, what could be wrong? Could it be they have just seen there parents, that don’t approve of there relationship? Is the boy  from the wrong side of town? Could Frank have been looking for this kind of image to use as a signifier?

The City Fathers. They are in some sort of a parade but what is the one on the right doing? The introduction says ” he is probably yawning” but I like to think he is blowing a kiss.

The nanny, In the UK in 2017 this picture wouldn’t have the same connotations as it does in Franks work in 1955, America was a bit different  than now in the Uk in 2017

When the work was published, I would imagine that for some it brought back darker time for black people in America.

Caught in the act.

The book is split into four sections each separated by the Stars and stripes, although I haven’t been able to figure out the subtle differences in each section.

The factory workers black and white working side by side, The introduction point this out, this to me in the UK in 2017 would be normal and if not pointed out to me I probably wouldn’t have picked up on it.

The symbolics of the book comes from the change that was happening in America at the time it was out with the old and in with the new. The youth of the day were forcing change slowly and steadily they Changed America for the better-removing segregation was one of the first steps, the Images show that this segregation was taking its time to happen as in the Trolley shot. The young were determined to do what they liked regardless of what the city fathers thought. The shot New Mexico represents America in the sense it as a Long way to go. The shot Chicago, the badge on the car says “Christ came to save sinners”. The next few Images are young people doing what young people do, The city fathers wouldn’t approve.   The last few images signify a new found freedom from the old way of thinking taking life by the tail.