The river Tame as a place in my heart because I grew up living next to it, as a boy I would be amazed at its power and the life that it supported. Of course, this was all just in my mind because, in reality, it was probably more polluted then than it is now, there were no, or very few controls regarding pollution, and if there was, very little was done about it. I spice many years ago that factories along the river all had quotes of how much factory waste they could dump in the river. There was one chemical factory that used to dispose of, Thousands of gallons of waste in the river each year they would get fined, a minimal amount. It was so much waste that when it hit the small rapids, it would foam up and block the roads 30 / 40 feet above the river. Thankfully I don’t think this practice still exists. The River Tame has been in the news this month for being the most plasticated river in the WORLD. ” One section of the River Tame was found to have 517,000 plastic particles per square meter of sediment – double the previous record for any waterway or ocean in the world” We can only stop this by educating the people and helping them to make the right choices when buying products. Products that don’t contain plastics.  Facial scrubs and many other products contain microplastics. Governments need to bring in legislation to encourage companies to stop using products that are not biodegradable or at least don’t cause any harm.

“Prof Jamie Woodward, head of Geography at the university, said: “We expected higher concentrations in cities and urban rivers, but in those, the levels were extraordinarily high.”

When the team tested again after the flooding of Boxing Day 2015, they found the levels had dramatically diminished – by 70 % – meaning they had flowed into the Irish Sea.

The plastic is thought to come from industrial sites near the river, stormwater drains and sewage overflow pipes connected to homes and businesses.

Because the fragments are so tiny, they are not filtered out by sewage plants and flow into rivers and eventually the sea.

Here, they are ingested by shellfish and plankton and often end up being eaten by humans.

Plastic particles have been found in almost three-quarters of ocean fish.

Although there is a growing body of research, it’s still not fully known how plastic contamination affects humans and animals.

However, it’s thought it can cause obstructions in the body and, if small enough, could pass into the bloodstream. It can also carry other toxins into the body.

Below is Bill He has lived in Tame side all of his life I asked him some questions.

“It is an absolute disgrace. It could be very nice if it were looked after, but no one seems to care, I mean they do care, but most people can’t do anything about it on there own.”

“I hadn’t heard that, but it doesn’t surprise me, the amount of rubbish that has been dumped in there over the years”.

“People could help a little, but rivers can be dangerous, it would need a lot of planning to organise a voluntary clean up team, but we could do a litter pick along, the banking that would spruce up the walkways”.

Bill on a walk along the River Tame.

Below is part of a water system that was used for the cooling towers of Stalybridge power station now demolished, these ponds have been fenced off for many years. When the cooling towers were in operation the water was drawn from two man-made ponds off freshwater, the water was used in the towers collecting many pollutants along the way, including sodium chloride, legionnaires disease and other unthinkable’s that were all gathered in the ponds below. When the managers decided they needed to change the water the dam was opened, and gues were it went. Through the tunnel below and into the river. 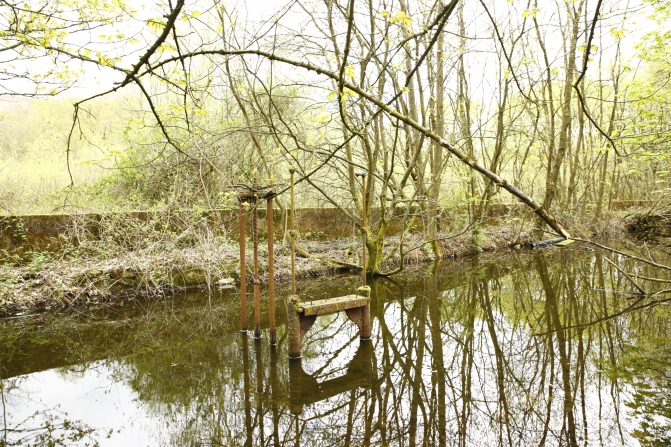 A small stream going to the river. The poisons and pollutants just in this little stream, is unbelievable, the origins of the items seem to come from a variety of places. 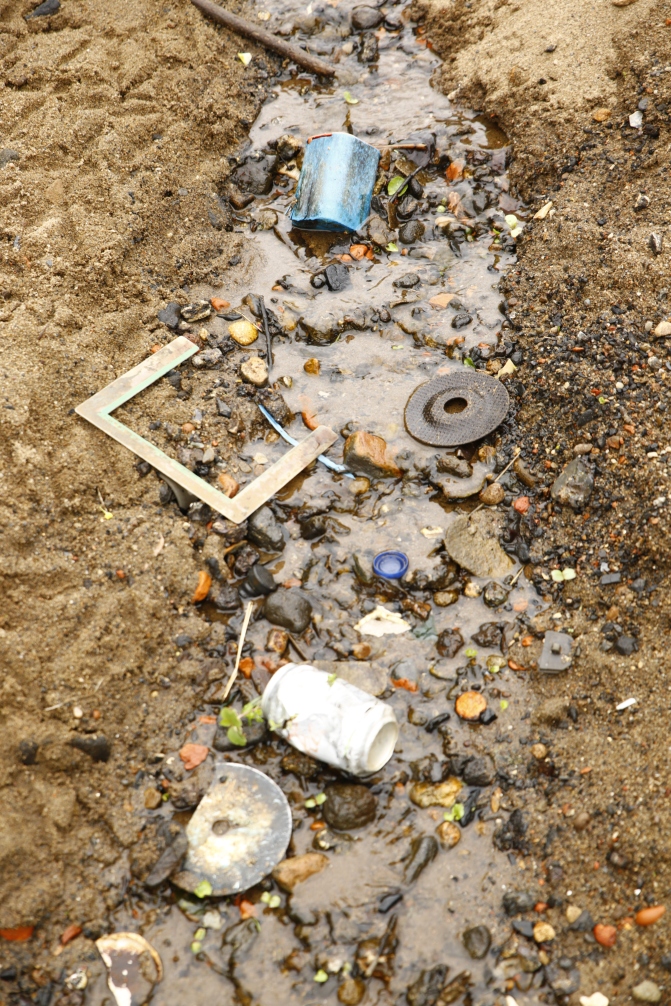 Now we have the dreaded plastic and other pollutants contaminating the river. I don’t think wildlife is too happy.

When they decide to unblock this, where will all of that pollutants go, I would like to think it will be removed and disposed of properly, but I have my doubts.

There are three wheels on my Wagon.

Where is my oil can?

Morning Dew the drink you can find anywhere. It’s next to the plastic but not on the shelf.

Why not go for a paddle on the river beach.

Below is Jonathan Susca, a partner in TAS Group, The company have offices and warehouse alongside the river Tame. He is a person that as strong views on the environment he lives next to a country park with his wife and children, he sees daily what a difference we can make by looking after our environmental surroundings.  His company is trying to encourage his clients to change from the plastic cups and packaging they use now, to biodegradable products. He as just introduced biodegradable straws to the line of products that they sell.  ” When I first heard the news reporting that the river was the most plasticated river in the world, I was shocked at first, but when I thought about it having seen the mess and rubbish that passes our offices floating down the river, I shouldn’t have been surprised.” Jonathon Susca 15/04/18.

I have found myself very frustrated with this assignment. The most frustrating thing about this assignment is the way we treat our environment and treat every bit of water as a dump, out of sight out of mind, I think is the train of thought. I was a little bit frustrated that my tutor was concerned that a lot of my images were taken in one day. I understand where he’s coming from as far as revisiting and reshooting and building a portfolio of images that you can then draw on for an assignment that you are working on over some time. When time is short, and you only have one or two days spare time to get the necessary shots, I don’t think it helps getting criticised because the shots were taken in one day, but I do understand his point if time was plentiful, but it is a home study course after all. It is why some people start the class is to do it when they have time. I have taken on board what my tutor is saying. I do understand his point of view, and my new images are stronger for the feedback. Shoot review reflects, reshoot, and yes, my pictures are stronger for reshooting.

The assignment, when I first thought of the idea I thought I could tell the story of the river and the way it was used as a rubbish dump building on the recent news that it was the most plasticated river in the world. I decided to walk the river taking pictures of the plastic and other forms of pollution as I went along, some of the images were difficult to get as I had to climb down the banking and over walls to get the shots. One or two of the shots were a little plain on first view and the rubbish not as prominent as I first imagined they would be, but when you click on them, and they go full screen, and you can zoom in the rubbish becomes the main point of the image.

After feedback, my tutor said the images weren’t metaphorical enough, I have taken this on board and changed some of the pictures not so much metaphorically but a lot stronger images on the first view. I have added captions in a metaphorically and sarcastic manner to emphasise the plight of the river. After feedback, my tutor was concerned that my research wasn’t related to my assignment. I can say my research is related to the exercises, and the exercises are related to the Assignment I will need to disagree with him on this point. What he could have meant that there was no direct link, as far as he can see. But there is a direct link to the assignment as the research is contained in the assignment three documents, and yes you could say the relationship is intuitive. Still, it is there within the document if it weren’t linked it would be somewhere else. I will try to create a direct link in the future assignments taking on board what he is saying.

The new set of images are stronger than the first set. They do tell a better story, they are more graphic, the plight of the river’s story is told, and when you consider this is just a tiny stretch of river you can imagine how much pollution there is in it.

I have included local people in the story and engaged with people walking on the river I have talked to local business and got their thoughts on the subject, but only scratched the service. I have included my interpretation of a pdf book dummy my tutor didn’t know if this was what OCA wanted or how to do it. I have taken on board my tutors thoughts on the first set of images, and I have changed them for stronger images that tell a more compelling story than my first set. I have now taken about 4 days to take all the pictures for this assignment more images to choose from to help make the assignment stronger. I haven’t used all the Images taken has I ran out of disc space when making contact sheets.  I have learned that closer is better the for this type of photography, the more graphic, the better showing closes up’s of the rubbish human beings have and are still inflicting to our environment.

The telephone critique was constructive and informative I have taken on board the guidance and advice given by my tutor, he was very informative and although I didn’t necessarily agree with everything, on the whole, a helpful and constructive critique. 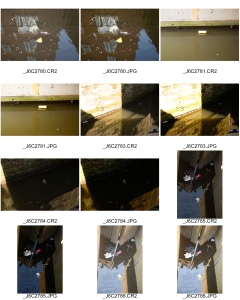 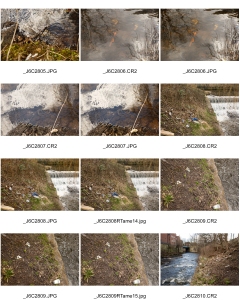 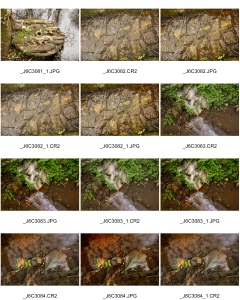 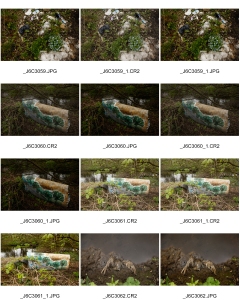 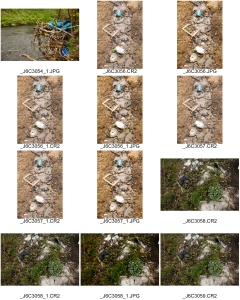 Images below are ones I have removed after feedback. 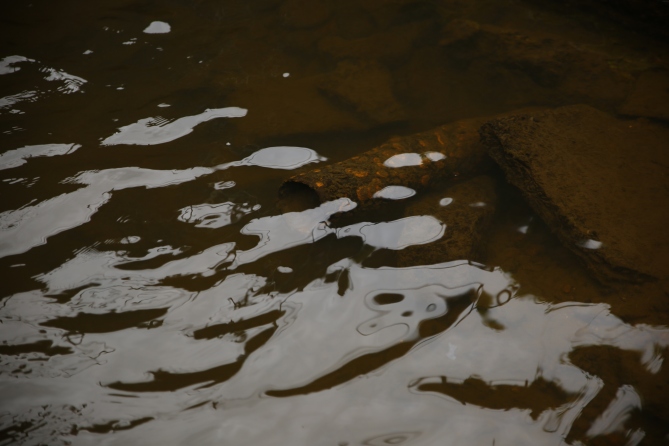 Some has been there so long it becomes part of the banking.

Look closely, and you can see the wild cans nesting over the river.